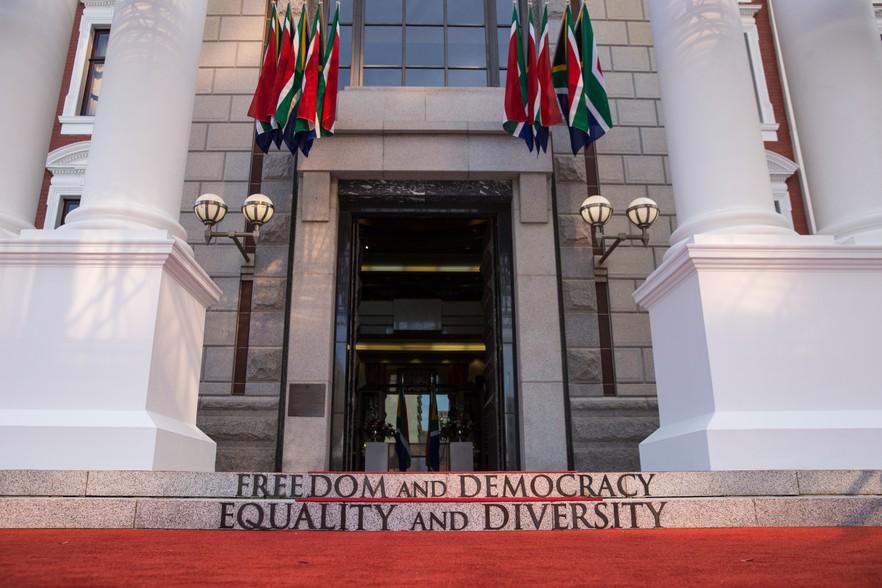 The traditionally glitzy start to South Africa’s political year at the State of the Nation Address (SONA) will be a more subdued affair in 2021 due to the Covid-19 pandemic. Scheduled to take place on 11 February at 7pm, this year’s ceremonial joint sitting of Parliament will see most attendees participating from their homes rather than the National Assembly chamber. No more than 50 people from the legislature, executive and judiciary will be allowed to attend the event in person; dignitaries, Premiers, diplomats and most of the media will have to attend virtually.

This year’s toned-down, digitalised SONA is expected to deliver some sober truths for our democracy.

SONA will cost less this year — but still a lot

With a worried public eye turned to an impending economic crisis and red flags about vaccine affordability, it comes as a relief that this year’s SONA will cost significantly less than last year’s event — R2.2 million compared with the R4.7 million budgeted for the 2020 ceremony.

This is still a lot of money, though, and South Africans will rightly ask what it is being spent on. Parliament has explained that this budget will be directed to the costs of the webinar, water for the 50 attendees, and boosting internet capacity in the Parliamentary chamber.

Disruptions to proceedings are unlikely

The ‘mute’ button might become a powerful political tool in 2021; one that Speaker Thandi Modise will be grateful for in the face of any attempt to disrupt the sitting, as has been done in previous years. But whether the Speaker can simply mute a disruptive MP in a virtual sitting — effectively removing them from the ‘chamber’ — will raise constitutional questions that go to the heart of the democratic process.

Roll up the red carpet

Politicians and state officials will forego their opportunity to walk the red carpet this year. While this will unfortunately come at a cost for local fashion designers, dispensing with the flamboyance of previous years is a necessity amid the devastating losses that South Africans have experienced in their families, businesses and livelihoods this year.

Turning to the substance, we are expecting the President’s Address to reflect on the nation’s resilience over the past year, and provide greater insights into how government intends to procure and administer the Covid-19 vaccine. The real focus, though, is on critical details around affordability, which will inform much of the year ahead, but these will likely be rolled over to Minister Mboweni’s budget speech two weeks later on 24 February. We further expect President Ramaphosa to emphasise government’s commitment to rebuilding our economy by highlighting the work done to achieve agreement with multiple complex stakeholders on key industry masterplans such as in the sugar and poultry industries. Finally, we anticipate that the President will reiterate the country’s commitment to rooting out corruption wherever it manifests, but don’t expect any new action steps to be announced – particularly while the Zondo Commission continues with its enquiry.

A humble and subdued SONA — with the requisite social distancing and Covid-19 protocols, of course — may be just what the doctor ordered.